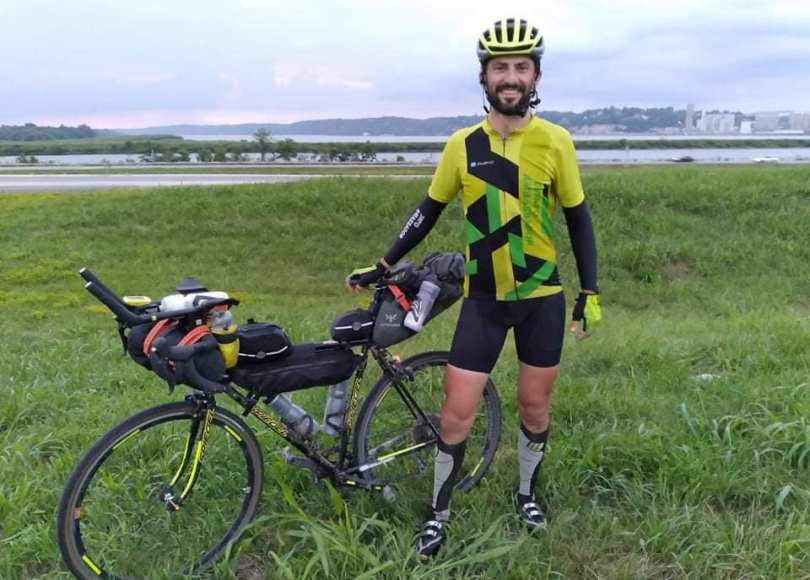 With respect to mileage, day 15 was one of the worst. The gap between me and Barry extended another 50 miles to about 240 and Michael was 60 miles ahead of him. Sleep deprivation was a real problem after pushing through the previous night on few short naps.

I got off the Katy trail in McKittrick, MO about 3 hours after my day started in search for some food . Kind of tired from gas station food but beggars cant be choosers. The trail runs along the Missouri river and the mosquitoes were plenty and very aggressive. To put it in perspective, if you stop for longer than five seconds, you were in danger.

It didn’t take long before I was falling asleep and it sucked as my designated sleep stop was only 75 miles away. Frankly speaking, It was dangerous to continue and I slept on a bench overlooking the river for 45 minutes. Taking a quick nap was uncomfortable in the heat and humidity.

The squeaky noise from my dry chain was making me nervous and definitely slower. Luckily, I bumped into a couple on a bikepacking trip. They were kind enough to offer some of their chain lube and I felt bad for not having anything on me to give back.

The rain continue throughout the day and I was so used to it by now. When raining, the chances of puncturing are increased and I fell victim to this statistic. Apparently, the rain doesn’t cause flats but the water acts as a lubricant for little things to go through a tire that normally wouldn’t. My rear tire was very bold and that night was when I would swap it for the front.

Katy trail surface in this section was not good at all. I started noticing “Rough Surface” signs all over the place. What was the point of having so many signs when it was obviously horrible? 🙂

The damage done by the storm was very obvious. Plenty of trees were laying on the ground and blocking my passage. My hiking skills were tested again to the fullest. It was a slow progress, but a progress. . .

Being a farmer here must be tough, the crops were submerged in water and it looked like a swamp.

At least the rabbits were keeping me company. Must be breeding season, they were all over the place. Every time I looked ahead , I could see at least five rabbits crossing in different directions.

Arriving at the Mississippi river was such a relief and a big deal for me. Katy trail ended and the state of Illinois was on the horizon. It also meant more populated areas and therefore I can travel a little lighter while stopping more frequently. As added bonus, my good friend Judy Rush was going to meet me here. And yes, her last name is not a coincidence, her daughter is the queen of pain Rebecca Rush.

We met around 6:30 pm with the bridge over the river in front of us. It was a quick stop for much needed hug, few laughs and pictures. The sky did not look too friendly and I had to move onwards quickly. This long trail was finally over with and I can stop feeling confined. Judy would spend hours of driving to meet all racers during BNUS and people like her make it worth it.

I was a total wreck at this point and apologized for my appearance 🙂 Truth be told , nothing else expected after biking the last 36 hours on two hours of sleep. She took some nice pictures with the Mississippi river in the background before my departure. I was told to expect seeing her again the following day.

Just like that, I was in Illinois and just six miles away from my hotel in Wood River.

As I jumped onto Confluence Trail, the rain was coming down really hard and I could barely see. Wind direction is very important and not in my favor this time. The drops were coming at a perfect angle and smacking me in the face.

Drenched to the bones, I made it to the Bel Air Motel. Honestly, one of the best low cost stays during the entire trip. I was placed in the newly renovated section, very modern and clean. The lack of laundry was my only complain. Washing clothes by hand was now my least favorite thing to do before going to bed.