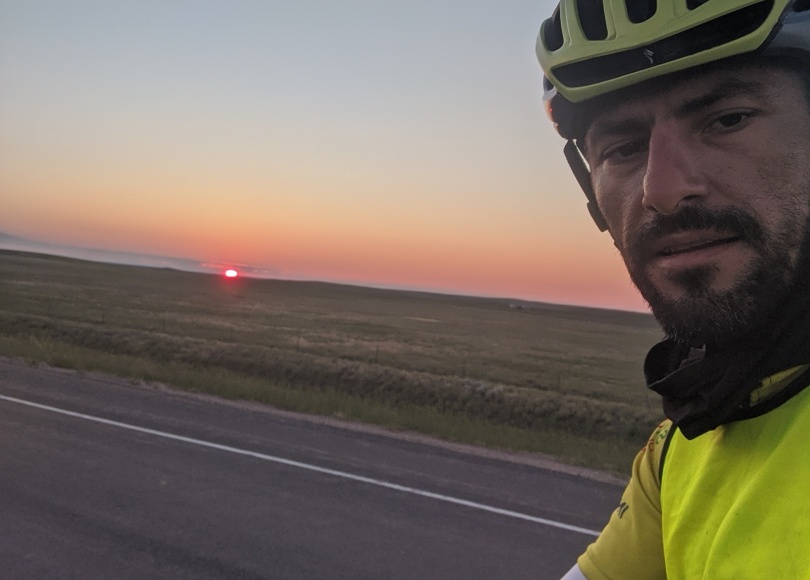 In the morning of day seven, I was right after Dubois, WY and still in 3rd place overall. Barry was about 80 miles ahead or just after Riverton and Mike another 80 in front of him. We now had new leader after the prolonged break from Barry the previous day. Behind me, some 220 miles away were the trio of Kevin, Jared and Andrew. They were seemingly moving together. Some 670 miles behind me were the last 3 remaining in the race – Jon, Don and Shery. They were also super close to one another. The biggest discomfort today was my right palm. It was turning blue but this too will go away with time.

I was headed towards Riverton, WY, about 60 miles ahead and looking forward to finding a hotel there. The National Museum of Military Vehicles was a really cool sight to see here. I need to return one day as a visitor because admittedly, I love history.

Wind River reservation was my current location. This is the third largest reservation in the U.S with more than 2.2 million acres in Wyoming’s Wind River Valley. It is shared by two Native American tribes, the Eastern Shoshone and the Northern Arapaho. It appeared abandoned and the population was visibly less than 100 people in most of the villages around. Some history below:

According to the 2010 census, only 26,490 people now live on the reservation, with about 15,000 of the residents being non-Indians on ceded lands and the town of Riverton. After1800 there were huge herds of tens of thousands of stampeding bison in the Wind River Basin, raising massive clouds of dust on the horizon. The Shoshone largely controlled much of what is now western Wyoming in the 1700s, because they were the first of the northern tribes to secure horses from the Spanish and traders in the Southwest. By the middle 1800s, the Crow were largely dominant in the Wind River Valley and Absaroka Range, using the area as winter range, and fighting with Shoshones who came into the area. In the 1970s and 1980s, oil and gas operators on the Wind River Indian Reservation were found to be stealing oil from the Eastern Shoshone and Northern Arapaho. In a coordinated scheme, companies extracted oil and paid some production royalties to tribes, while also secretly collecting and selling a separate supply of oil for which they paid no royalties. The exposé led to reforms.

I passed by Crowheart in the early morning, population 141. Nearby was the site of a battle between the Crow and Shoshone American Indian tribes in 1866.

In the early afternoon I arrived in Riverton, the 9th largest town in the state with population of about 10 000. It was so uncomfortably hot and I was running low on supplies so making it to town was like finding oasis in the middle of the desert.

There were some decent hotels here for a good price and I spend 10 hours off the bike recovering. My body was so beat up that I had to accept falling behind further from the top two racers in order to treat my wounds and feel a little better. It became apparent that I was fighting to continue pushing forward and somehow finish this race at all cost. I ended up finding Subway around the corner and purchased 5 foot long sandwiches + plenty of cookies 🙂 One thing I learned by now was that when I find food before going to bed, I am buying enough for dinner and breakfast. Business hours in the west are much shorter than more densely populated areas and I don’t want to worry about finding food when I wake up.

I was able to wash my clothes by hand and have them dry right outside my room on the railing. It was so hot that a dryer was not needed nor was it available. . . My injuries from the crash the day before were getting worse and I took all the time I can to recover and slept for nearly 7 hours. I left close to midnight and was thinking about pushing for the next few days with power naps in attempt to make up some of the distance between me and the top two.

After Riverton, we were given alternative route towards Casper, WY. Apparently, Poison Spider Rd was super nasty, gravel and there was no services there. The conditions were so brutal that the organizer must have felt bad for us. We were still experiencing life threatening conditions with the record breaking heat wave. Instead , we took the main road US26E through Shoshoni, Moneta and Natrona. We did had the option to take the original route for some bonus hours but I was so trashed for that.

Nothing really happened for the rest of the day. I was just happy to be riding in cooler temperatures durnig the night and not have any major climbing. I made it all the way to Casper, WY that morning and covered nearly 120 miles in 8 hours. It was a peaceful night, flat, minimal wind and I was pushing as hard as I can to make up some ground. I was still doing most of my damage at night time when colder and this day was no different.

My day ended as usual at 5am ( start time in Oregon), some 20 miles prior to Casper under glorious sunset while counting the deer running beside me. Not a bad place to be for 4th of July !

Or enter a custom amount