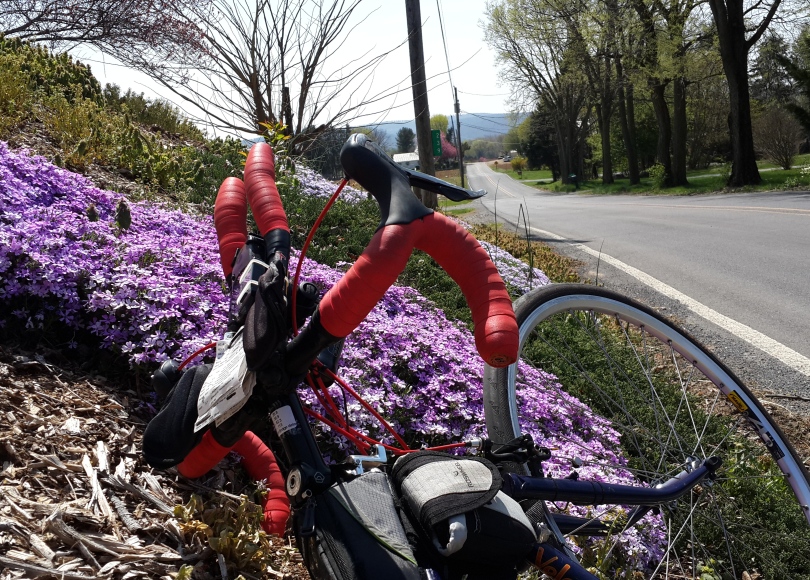 While many of you are out there riding Fleche in the rain, I finally had a chance to finish my ride report. Bon route to you and  stay dry. May the winds be with you . . . Can`t wait to hear the stories.

I guess I never want to learn my lesson. Instead of increasing my workload by 10 to 20 percent every week I ended up going out for a 188 mile ride last weekend. This year my longest ride has been 32 miles, having done only 70 miles in one day.

If , on the other hand, in the midst of difficulties we are always ready to seize an advantage, we may extricate ourselves from misfortune . . . Sun Tzu

Its been a great year in the DC area for cycling .  The winter was not bad at all, actually soft for my standards. I had more chances to be outside than usual. Did some indoor training, but we all know that I am not a fan of it. Maybe not until I get a nice trainer and connect with ZWIFT to others. My light workload has been mostly intervals. Hopefully I can acquire a power meter soon and get a structured training plan to achieve my goals. And what are the goals one might ask?

Well, on the Randonneuring front, definitely complete the SR Series, plus some more. Also,  volunteer to organize another ride this year. Since I started racing 12 hr events last year , I am using that as a good training base. With distances increasing steadily , I should be getting the full benefits. I also joined Yoga classes. We are about to find out what the final results will be.  The next goal is to participate in 3 x 12h races – In Maryland, Michigan and North Carolina.

Back to the 300 km brevet . . . This is the second time I can recall doing this particular ride. The roads are very familiar , as DC Randonneurs ride a lot  north from Frederick. I remember doing this ride in 2011. It was my second brevet  in the US after relocating from Bulgaria. Soon afterwards I had bad knee problems for a long time that prevented me from cycling for over a year. Now I remember why ! I recall spending a great day on the bike with Chris Mento, who I thought was a great representation of what Randonneuring is. He made sure that he stay with me and guide me until the end. And I was struggling in 2011.  With a nasty knee pain from probably pushing too hard on the hills, and  a bike that was never sized to me.

I wasn’t really expecting all the climbing that was coming. Looking at the elevation profile I thought to myself :

I see 2 big hills in the beginning when the legs are fresh , and then somewhat flat , rolling terrain until we face a third climb later on.

Maybe  I just wanted to make myself feel a little better . What was coming actually hit me in the face . . . However,  There were few issues before I even started pedaling up those hills :

I slept only 3.5 hrs in my car at the ride start after driving straight from work there . I figured that If I first go home Ill only get 2 hours of sleep. At least that was the idea. My hopes were that my shoulder will be fine. It has been killing me for over a month.

Enough with the excuses. The above “issues” just  made everything more challenging. Aren`t we here for the challenge?

At 4 am I was getting myself ready for the 5 am start.  Everybody else just pulled up to the parking lot , took their bikes out and went to the near Waffle house for a breakfast. As always, I wasted the most time getting ready.  Here is a picture of that struggle.  Thanks for the photo Bill Beck .

Ten minutes before the ride start I left the parking lot. Riders were lined up outside the lobby of the  Days Inn Frederick. This was the start/ end point for today. It is always nice to see familiar faces and spend the day together on those beautiful country roads.

It was time, and Chris gave us final instructions before we departed.

My brain was still foggy. I remember asking Kelly what ride are we doing , as the starting location looked familiar. I swear the name was not Frederick 300km ! So confused. Later, I realized that we are doing the same exact ride I did 6 years ago .

It was still dark and   a  line of tail lights formed along the empty streets. Theresa came from the back , and we chatted for a bit before I moved towards the front slowly. I knew that I should have backed off a little in the beginning.

We headed north through South Mountain , then west for some climbing up Catoctin State Park. There is always things happening in the first 15 miles. Damion , who is always in the front and gets no draft since nobody can keep up with ,missed a turn. We were a little behind and most riders almost followed until someone screamed. I think Eric reduced his speed, while turning right in the correct  direction. Hold on , did I forget to look at my GPS ? Shame! This almost created a big pile up,  and scared the crap out of me.

I missed someone rear tire by like 5 inches. Damion soon came from behind, and that was the last time I would see him today. I knew better not to follow any fast riders. It was a long day ,and pacing is a key. Again , ride in your limits, remember ? You need to be smart about your abilities, understand your body and listen to it.

Soon afterwards we approached a metal bridge. It was still dark and the bridge was wet. . . Someone screamed, and here it was again. Wow, really !  A new rider from the club ( who moved here from From SF I was told ) was in front of me pressing on his brakes. His bike was sliding  hard left , then right again. Luckily he did not fall. If he did , I was going to be on top of him but luckily he kept his balance. It was later in the ride that I encountered the same rider around mile 67.  He was going up one of the biggest climbs of the day. I believe it was named  ” Big Flat” . You guessed it right – nothing flat about it. He said that he was chasing me for like 40 miles. I didn’t even know about it ! He looked exhausted but climbed up that thing like a goat . In the meantime I was pedaling soft while looking at the HR monitor.

Ahead of me was the above mentioned rider plus Damion, Eric, Caleb, Andrea, David. Also the strongest man today with a Fat Bike. Yes, on a 300 km ride with 11k climbing.

I arrived at the first control at around mile 30 averaging 17mph. The control was in a small convenience store . I patiently waited for the cashier to take a phone order for a sandwich. All I wanted to do is keep moving as I hate stopping for too long that early.

Soon afterwards we were facing one of the biggest challenges of the day – a climb called Big Flat. I told you about it already. If I can conquer that, then nothing can stop me . . . My little stem note was telling me that I will be climbing again for over 5 miles. So I made sure I hydrated properly and ate while pedaling soft. In the middle of the climb I was caught by the gentleman from SF.  He was looking so tired , but still climbing stronger than me. I didnt wanted to overwork myself very early.   I can pick up steam on the flats and make up for it. Luckily we didnt have to go up that hill in the middle of the day and deal with the heat. The best reward for climbing is always the views from the top . . . Then , enjoyment of going downhill. I tend to go crazy on the downhill and need to learn to control myself. But there was no wind , cars, bad turns, and the pavement was great. So I bombed down carrying my skinny body at 46.5mph. Talk about adrenaline.

Next stop was Sheets in Shippensburg . I met David there. He was falling behind the first group. They were keeping a strong pace , and he was dealing with some calf problem . I had issues on my own and spend there 15 minutes. That was almost half the stoppage time for the day. My digestive system was shot. Not to myself :

Just because your job has free food the night before a big ride , doesn’t mean eat two big plates of it” .

We descended deep into rural Pennsylvania. You can smell farms . . . and cow poop . What else can I ask for?  Somewhere around here I had the usual dog chase. It was the smallest dog on the farm, but it gave me a run for my money !

According to my notes there was no other serious climbs until mile 110. So I duck down on my aero bars in hopes of  making up some time. I didn’t really encounter other riders anymore. The lead group was in the front , and everybody else behind me.

The new challenge however was called HEADWIND . Everyone reported similar conditions after the ride. This was the main issue for the last 100 miles. My worry was the next small achievement , in other words – next control . I was approaching Rocco’s Pizza in East Berlin . Its time for the first real food of the day. Five minutes later,  few slices of delicious pizza and I was on my way south.

Knowing that 130 miles were behind me, I was really optimistic and pushed on. I refused to be scared of some miserable 58 miles to the end. But Mother nature had different plans . . . I was either getting weaker or the wind was getting stronger ! It was so  hard to stay above 18 mph. The solution –  press hard and don`t think about it. After all I was on my bike doing what I love. The only stop that I might had to make was for some water.

The plan for finishing in 13 hours evaporated long time ago . . . Aside from the excuses of early season , hills, and wind I wasn’t too pleased with myself. Lets move to goal 1000 of the day – finish under 14 hours and stop complaining !

As I approached Frederick, a previous run of this ride reminded me how confusing was in the end. Even my GPS could not save me this time. After a cemetery I was supposed to turn right , but was going straight for no apparent reason. Following the red line on my GPS was harder than I thought. . . I was going in circles up and around MD70, and   found my way back around and towards the finish. Official finish time was 14h10min. Still better than my last attempt of 15h35min.

Chris was at the finish line greeting all of us and ordering  fresh pizza. Thanks again for the excellent organization.