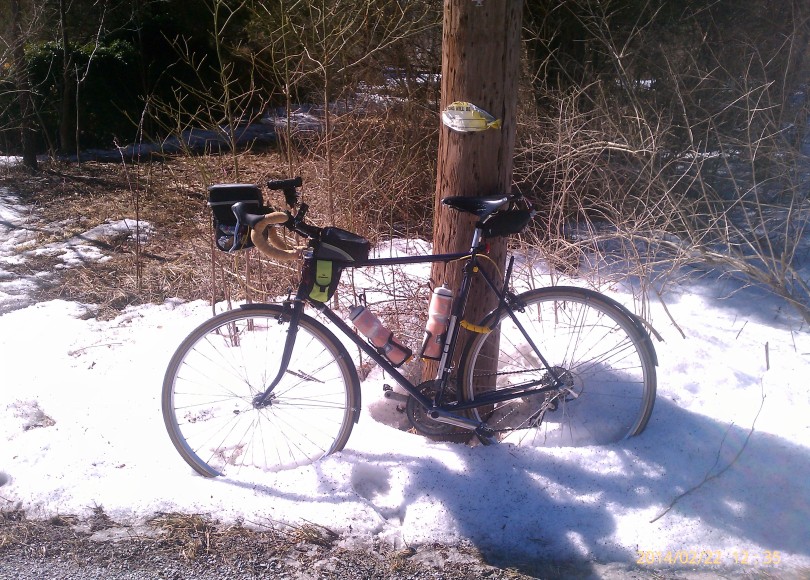 This Saturday was my second 200km brevet of the year.  For February  I decided on doing “Last Train from Clarksville 200 km”, a route designed by Crista Borras fr0m DC Randonneurs. Starts and ends in  Clarksville,MD. It is a loop with 7600 feet climbing – I think average for DC Randonneurs rides. As Crista describes it – Is a hilly ride heading northwest through Libertytown and Woodsboro to Fairfield PA, returning through Union Bridge and Mount Airy.

My start time was again 6:30 am from MCDonald’s in Clarksville.

It takes me out towards Dayton, MD- a very familiar area. I used to train there while living in Columbia. It was still early in the morning and very chilly. I needed to wear my face-mask again , shoe warmers as well.

Not too long after at around mile 6 , I was going uphill by Triadelphia Rd. I noticed few areas with black ice because it was at higher elevation, and in a shaded area surrounded by trees. Before you know it, I slid and fell on my left side. There was  not much time to react. The result was hitting my head , small bruise on my leg and bending my left  Shimano 105 shifter hood.

The Helmet saved my head from anything serious.I knew this was not going to stop me. I checked that everything is ok , shaked the dust and kept on moving.

Around 7:30 the sun was full on the horizon. What a beautiful picture…

I had a bike fit a week before the ride and it felt so much better. Just to note that – Smiley is one of the best bike fitters in the world, and I  feel  fortunate to live 20 minutes away  from him. His new web page is also up and running – http://bikefitbysmiley.com/ . So much farmland, so much nature, I love it. It was an amazing ride. As time went by, temperatures were rising. At every control i would take a layer off. Soon enough it was so warm ,that all the snow was melting, resulting in colorful rivers.

Around 11:30  I was in Fairfield, PA and  went to one of the first stores that were open.

It was a small local grocery store with pizza place inside. Got a chocolate milk for recovery and refilled my hydration pack. Maybe about 5 minutes later I was on my way back to Maryland.

There were not many other cyclist on the road.  I passed a man who appeared to be a randonneur as well , greeted him and continue pedaling. Few miles later I was in Mt. Airy.  My next control was there at  Highs Shell. I got batteries for my GPS and Snickers Ice Cream – suggested by a fellow randonneur from Bulgaria. He actually posted it in Facebook in responce to one of the photos I published during the ride. He did not explain  to me how ice cream is helping in endurance events, but it sure taste good 🙂 On my way out of Shell I  bumped second time into that fellow rider I met few miles back. Now I noticed that he had a DC Randonneurs logo on his Vest. His name was Rudy and he was also doing a 200km brevet . Such a coincidence! We took pictures of each-other , shaked hands , exchanged few words of encouragement and continued with our endeavors.

I had a slight discomfort in my right leg between mile 70 and 100 , but later on it felt just fine. Determined to finish in decent time, i pushed the pedals for the last 30 miles or so. My goal was to finish for around 10 hours.  It was such a relieve the see my son and wife at the finish point. Another great ride was in the history. Next up will be the first official 200km brevet for my club. It’s the DRC Wilderness Campaign on March 8th.